The Annual General Meeting (AGM) is where the important legal bits happen – it’s your opportunity to get an inside look into how the union runs and where we spend money. You get to be part of vital decisions about the union’s inner workings, and have your say at the highest level.

The AGM, along with UCASU’s trustee board, are the highest decision-making bodies for the union. We have several processes and groups that inform how we work as an organisation, from referenda all the way down to our liberation groups. You can get involved at every level.

Want to submit a motion to this Meeting? Download the template here and sent to callum.mitchell.su@uca.ac.uk by 6pm, Friday 29th December 2019.

HELD VIA VIDEO CALL BETWEEN:

These are the minutes of the University for the Creative Arts Students’ Union, Annual General Meeting.

Marta Szurmiej (MS for the continuity of the minutes), UCASU President, welcomed and thanked all for their attendance. MS requested a head count and final numbers from all campuses to ensure a 1% quorum was met as per the Constitution 10.9. The meeting began at 13:28.

Minutes were taken as read. MS asked if there were any questions or queries surrounding the minutes. None were given.

MS proposed a vote to accept the minutes from 2017:

2. Receive the report of the Trustees on the Union’s activities since the previous AGM

MS asked for any questions concerning the trustee report. None were given.

MS requested a vote to approve the received report.

3. Receive the accounts of the Union for the previous financial year

MS presented the accounts and reported notable achievements and performance. This included income, expenditure, and an explanation of deficit as per the presentation.

No questions were asked regarding the documents.

MS requested a vote to approve the accounts.

MS explained the role of an auditor and why the Union has one. MS noted our auditors are Kingston Smith and gave a short background information of them.

MS requested a vote on the continuous use of Kingston Smith.

MS noted the following affiliations and requested a vote for approval.

7. Open questions to the Trustee by the Members

MS opened the floor to any questions. None Were asked.

MS thanked all for coming.

Since the 18/19 academic year, we have been engaged in a number of different activities and developments as a union. Below is a list of achievements or wins

List of activities completed by the Union in the 18/19 Academic Year:

From: “To ensure quoracy there must be a minimum of two (2) Sabbatical Trustees, one (1) Student Trustee and one (1) External Trustee present.”

To: “To ensure quoracy there must be at least 51% of Sabbatical Trustees, one (1) Student Trustee and one (1) External Trustee present.”

Motion to declare a Climate Emergency

Congratulations to our prize draw winners! 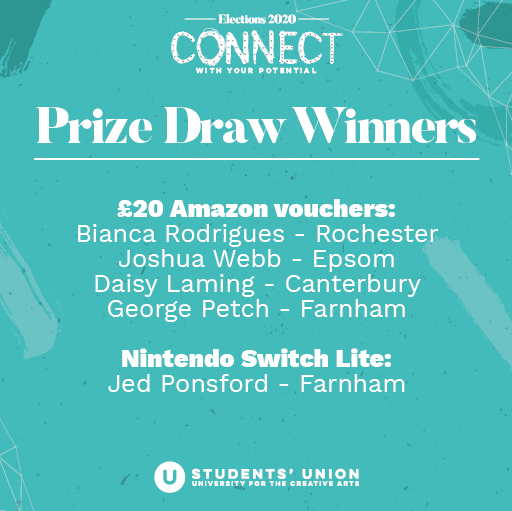