Chain Restuarants? Are they Vegan?

Sometimes it's hard to be vegan and go out if you're not really sure what's accessible for us, well I have some great news! you'll probably be surprised to hear that some of the biggest chain restaurants have started vegan options, I spent many hours panicking and worrying about meals out with friends and to start with more often than not - I'd go for the vegetarian option just so I wasn't a pain to the chef or my friends. There is only so many times you can do this before you begin to feel like sticking to your vegan roots is reason enough to say "No, I'm a vegan and I don't want to subject or pushed into having a vegetarian option because I feel bad for the chef" So instead I tend to stick to places that are vegan friendly.

Most chain restaurants will have some sort of menu published online but if you find yourself out at a restaurant, haven't had a chance to 'prepare' for your meal out and don't feel comfortable telling people you're a vegan yet here is what I'd do:

TIP; Find something vegetarian for example;

Nandos - probably not the example but wait.Salads and wraps are an obvious choice, Hold the cheese and the mayonnaise or any sauce if you're unsure and you have yourself a Vegan alternative with just a few changes without any mention of the word Vegan. Also, they have loads of oils and dressings at the table you can always check over if you feel your meal needs a little extra - SIDES, always look at the sides to see if you can add a little something to your meal ; Most of what you'll find will be chips and sweet potato wedges but ask for some Peri-Peri salt to add some interest or some chargrilled veg if you're feeling healthy!

However if you do get a chance to look at their menu simply click on an item of interest,
go to dietary and all the information you'll need is there.

Here's a 5-minute video of VeganHoodie, the YouTuber showing us everything you'll need to know about being Vegan at Nandos, Even their garlic bread is vegan too! who knew?!
Having said this, Nandos refuse to claim themselves as vegan as there is always the chance of cross-contamination in their kitchen's but that's up to you guys whether you're concerned with that information or not but the base ingredients ARE Vegan.

I can already tell what you're thinking... "PIZZAexpress how the hell can that be vegan, its literally ran by cheese throughout its menu?!" Well, think again Pizza express offer at least one option throughout their menu that is dairy and egg free. Their dough is only 5 ingredients - Water, salt,yeast, sugar, and flour, the Passata is milk free meaning you can order a vegetarian pizza with no mozzarella and there you have your very own Vegan pizza. As is not surprising they don't have pesto that is vegan-friendly however, offer a lovely dip called 'Pesterissa' - It's a tangy, spicy tomato dip that is Vegan and goes well with doughballs making it the perfect starter.

It's a wonderfully tasteful dish best served on a classic, I say this with your best interest - where the Pianta has no cheese it can dry up rather quickly in an oven that cooks at about 350 degrees so having a more dough base makes sure you don't break your teeth on crispy dough!

TIP; I'd suggest this for all options at Pizza express with no cheese

Everybody's favourite part of a meal is dessert, you'd be lying if you told me otherwise! Unfortunately, when it comes to dessert there is only an option of Raspberry sorbet - which by no means is bad, It's delicious, sharp and tangy and the perfect palette cleanser. When it comes to the coffee they don't offer soy which leaves you with an americano styled coffee but their coffee is fair trade and organic and will wash a lunch done perfectly.

If you've been Vegan for a while you probably would have heard about Zizzi's New menu items which really excited me and I couldn't wait to try it for myself, The new vegan menu has surprisingly a couple of options including a choice of starters, a pizza with cheese!? - they use 'Mozzarisella' which is a plant-based cheese made from rice milk - AND it's delicious and creamy and really helps to reduce that cheese craving so many people say they could never go without! With extra toppings available for only 80p each which is a fair request when other places seem to charge around double that it seems like an opportunity not to miss. The other dish is a lovely No-Egg pasta dish in a tomato sauce which is totally customisable with your choice of extra ingredients.

Tip: In Zizzi's when being seated simply ask for the allergen Menu to get The Suitable menu for vegans

All in all, I think Zizzi's is one of the best vegan-friendly chains I've been too. A choice of Vegan food is not something I've come across until recently with chain restuarants So I was delighted with this and even more delighted with the level of ease to order for my dietary needs.

Other places, like Wagamamas, are used to vegans by now and have been offering vegan alternatives for quite some time - With Wagamamas, you know the food is all made fresh this giving you the option to remove something before it's made that could make it vegan for example: I get the Yasai Surendra Curry which can be MADE vegan if you remove the sweet potato (you can't have it as it's fried in the same frier as the meat dishes I was told - Maybe at bigger stores a sweet potato is an option too but for me it's not) but again just ask the staff for the Allergen menu and it will show you what is vegan and what can be made vegan.
Vegan options include:
Warm Tofu Chilli Salad
Edamame
Wok Fried Greens
Raw Salad
Goma Wakame Salad
Yasai Gyoza
Yasai Itame
Super Green Juice
Carrot Juice
If you're just after something quick and on the go, Pret A Manger does a beautiful sandwich called Supergreens and Red as well as a list of other things that can be found here 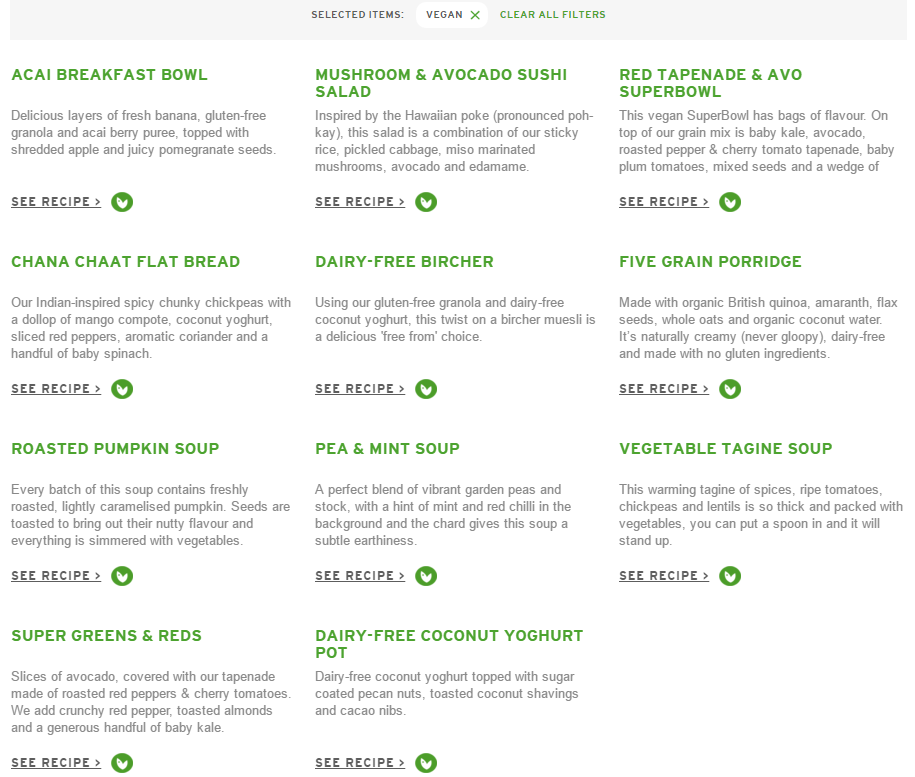 Pret also has an online menu with a Vegan filter that is definitely worth a look with some fantastic looking dishes on it. Found here:https://www.pret.co.uk/en-gb/not-just-for-veggies

Pret A manger also offers Soya milk so it's definitely one to be trying in the near future if you haven't already!

The more I explore my own veganism the more I'll write these posts for you - I won't review anything I haven't tried myself or seen in the restaurant.

Posted in: Blog on Thursday, April 5th, 2018 by rileyclowes

We have made some changes to our Black History Month event line up - we are very excited for you all to get involved!

Make sure you pick up your free tickets here: www.fatsoma.com/uca-students-union ... See MoreSee Less

We promote a number of surveys for students to complete every year, this helps us understand what you would like us to work on, what's important to you, and informs our work going forward. The first survey is now ready, Follow the link below to complete! surveymonkey.co.uk/r/20-21Volunte…